Dean had a fantastic time talking to, and meeting, the young people who have worked very hard to earn the Duke of Edinburgh Gold Awards, and their guests, at the awards ceremony in the gardens of Holyrood Palace, Edinburgh.  He also met and chatted to HRH Prince Edward. 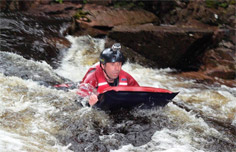 May 28th - Glenmore Lodge
On Thursday May 28th, Dean will be talking about his adventures at Glenmore Lodge, near Aviemore.
Read more...
April 23rd, 2020 - Buxton Adventure Festival
On Thursday 23rd of April, Dean will be talking at the Buxton Adventure Festival. See
Read more...
October 19th - Tullynessie Hall, Aberdeenshire
SUP to St Kilda talk Saturday 19th October 2019 – 8pmTullynessle Hall, Alford, Aberdeenshire Hosted by NESKy (North East Sea Kayakers) Dean talked about his 2017 stand up paddle-board trip to St Kilda.  This was the first, and so far, only SUP trip to the islands.  It was the fulfilment of a 25 year dream for me, which included 2 days of paddling...
Read more...
March 1st - Braemar Mountain Festival
On the 1st of March, Dean spoke at the Braemar Mountain Festival about his sight, his adventures and his SUP to St Kilda.  Testimonials
Read more...
July 5th – Dean was a presenter and speaker at the Duke of Edinburgh Gold Awards ceremony at Holyrood Palace.
Dean had a fantastic time talking to, and meeting, the young people who have worked very hard to earn the Duke of Edinburgh Gold Awards, and their guests, at the awards ceremony in the gardens of Holyrood Palace, Edinburgh.  He also met and chatted to HRH Prince Edward.
Read more...
June 5th - Birnam Arts - SUP to St Kilda talk
June 5th – Dean, and Patrick Winterton spoke at Birnam Arts, north of Perth, about their 2017 “SUP to St Kilda”, where Patrick, in his sea kayak, guided Dean on the first ever SUP to St Kilda - 70km over 2 days, including big waves, a very scary night on a rock, and the fulfilment of a 25 year dream for Dean!
Read more...
© Free Joomla! 3 Modules- by VinaGecko.com